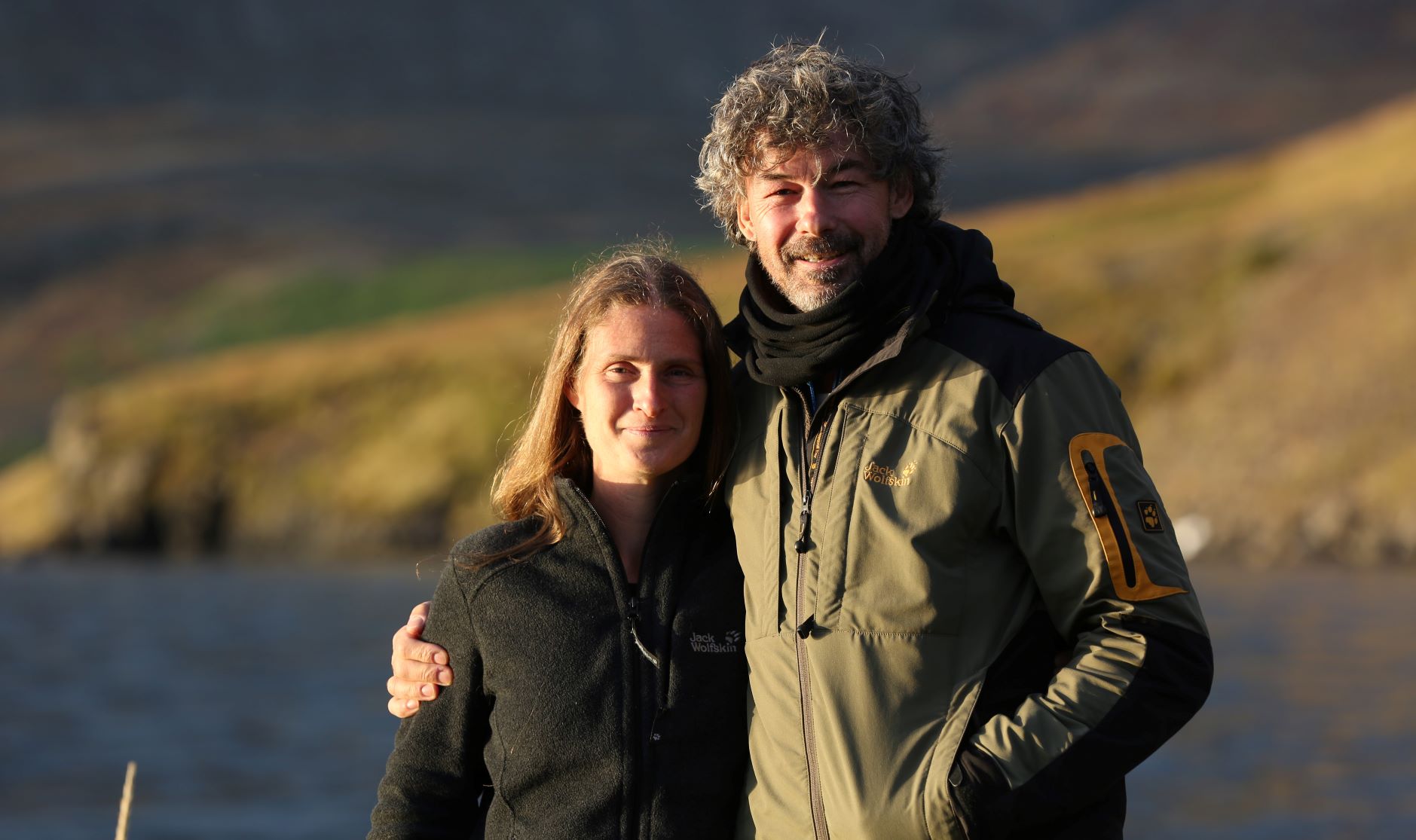 In Conversation With: Conserving Carpathia

Over 300 people tuned into our latest Wild Horizons series with conservation pioneers, Barbara and Christoph Promberger and Isabella Tree.

Listeners joined us from across the globe from over 47 different countries to discover one of the world’s most ambitious and inspiring restoration projects in creating Europe’s largest forest National Park: the Carpathian Mountains. Many brilliant questions were posed to our expert panel which prompted interesting insights and untold threads.

We heard stories of bison reintroductions, the conflicting perspectives on wolves and their significance in this ecosystem, and the importance of community stakeholders when creating a National park. It was an extremely inspiring and rewarding conversation.  Between 24th June and 1st July 2023 we will be leading a small group in Carpathia to engage with the project firsthand – Read about the itinerary and join the journey here.

To capture this gold dust of insights and learnings, we’ve rounded up a few takeaways from the conversation that resonated with us.

1. Wolves play a vital role in maintaining balance in the ecosystem

The story began with wolves.

Both Christoph and Barbara share a big love for wolves and their work with wolves was what sparked their move to Romania, independently.  Christoph became one of the first people in the world to work on a wolf project in Europe, after returning from studying a Masters in Wolves in Canada. “I looked at where the most wolves are in the world, and this is how I ended up in Romania” he tells us.

In 1995, biologist and conservationist, Barabara, discovered and joined Christoph’s research project on wolves in the Rseven pack of wolves on forest snow photo – Free Image on Unsplashomanian Carpathians. “Spending time in these amazing forests, with the amazing people, landscapes and the wolves, that was it for me. I really fell in love with the country” she said.

“In the 1990s, most people thought wolves lived in Alaska and Siberia,” said Christoph. “The Carpathians is a very remote and wild place. I remember talking to people and explaining that wolves can live almost anywhere. It’s more a matter of people letting wolves live. Nobody believed me. But in these last 30 years, the wolf population here has made such a remarkable comeback.” With a population of around 1,000 that is a remarkable example of the resilience of wildlife when given habitat to roam.

Whilst large predators will always remain controversial, coexistence can and does happen.

“We soon realised the most interesting part of our study was the interaction between the wolves and people,” explained Barabara. “We had most of the wolves in the EU, but at the same time, over 20 million people, plus millions of sheep lived in the mountains. But it all worked fine. So, we began investigating how such a large population of wolves could co-exist with livestock and people living in the mountains.”

Some of the wolves had even begun moving into the cities, hunting for rabbits, rats and cats. “The wolves found it was an amazing hunting ground for them. It was much easier food than going after red deer and wild boar.” said Barbara. “Wolves are pack animals and social and very adaptable to different conditions. To me, they are a symbol of wild places.”

“Although it is very hard for us, in order for people to live with predators, we have to find this balance,” says Christoph. “If there is a particular animal or pack who loses its fear of people or focuses on livestock, we should manage this. But, for anyone who’s been in a wild place and heard wolves howling, it raises the hair on your neck. It’s such a magical feeling.” Christoph can’t help but smile. 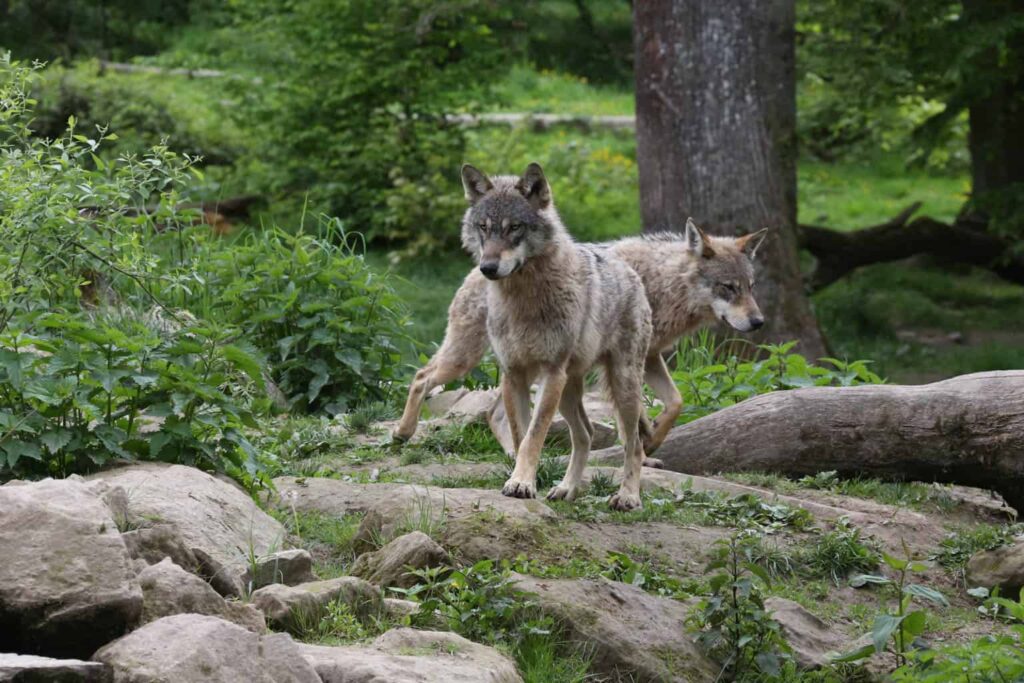 2. Rewilding allows us to dare to think big

“This is one of the most exciting projects in this world, at the moment”, beams Isabella Tree. “It is unique in Europe because of its scale. It’s become known as the ‘Yellowstone of Europe’, and that takes some doing.”

Conservation Carpathia’s flagship project, deep in the Făgăraș Mountains covers more than 250,000 hectares (600,000 acres), encapsulating majestic landscapes of forested mountains, going all the way to alpine levels, ragged peaks and virgin forests. “It fills you with this amazing sense of wilderness. It is really thrilling” enthuses Isabella.

“It has these endless forests”, says Christoph. “We’ve done a study and 10% of the whole surface remains virgin forests. Where else in Europe do you have anything like this? We also have wolves, bears, lynxes and chamois. We’ve got everything.” The success and scale of this project is a prime example of large-scale rewilding – the potential advances of nature when simply left to its own devices. 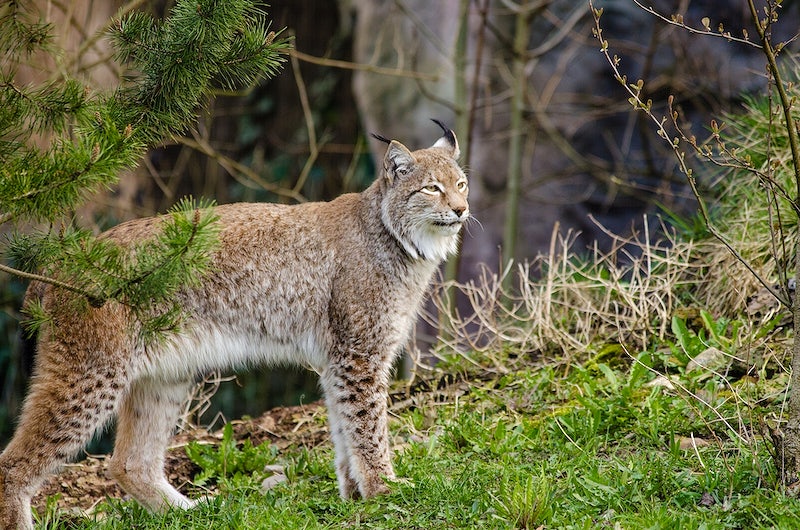 3. We can stop deforestation in its tracks

Creating a project of such scale has come with many challenges. The forest, once preserved for hunting rights, was given back to the people of Romania in 2004, leading to a  ‘free-for-all’ with no protection. Logging escalated significantly.

“Most of the owners didn’t live anymore, so their heirs inherited the land, who had no relationship or connection to the forest,” explains Christoph. “A timber mafia formed who understood there was a big business behind logging. They offered the owners money to give them the right to manage their land, and cut the whole mountainside – over 100 hectares. A lot of money was made. This situation spread like a tumour all over the mountainside. Whole slopes became deforested. We knew we couldn’t let it disappear.”

With experience of creating a smaller 15,000 hectares national park, the pair knew their only possibility of saving the forest was to compete with the logging firms. They had to buy up the forest and re-privatise it, to protect it.

“We saw this beautiful forest being turned into a big disaster of destruction and cutting,” said Barbara. “Having known this forest for ten years, we together, decided this had to stop. We knew if we lost the habitat, we’d lose the carnivores too.”

In 2009, Barbara and Christoph Promberger approached the Zarnesti court with the vision to create a world-class wilderness reserve. Over the continuing course of ten years, with the support of 12 philanthropists and ongoing support from sponsors and a growing team, the team began their restoration work, replanting trees on the baron mountainsides. This deepened their relationship with local communities and provided new employment opportunities.

“People were very suspicious of us. They couldn’t imagine that someone would buy all of these forests and not use them. They were waiting for us to come in with the big machinery and bulldoze it all down to make millions,” laughs Christoph. “There were rumours that we had found gold mines here, uranian and that we had plans to build bear enclosures for hunting and ski slopes. Nobody could believe we had purchased the forests to protect them.” 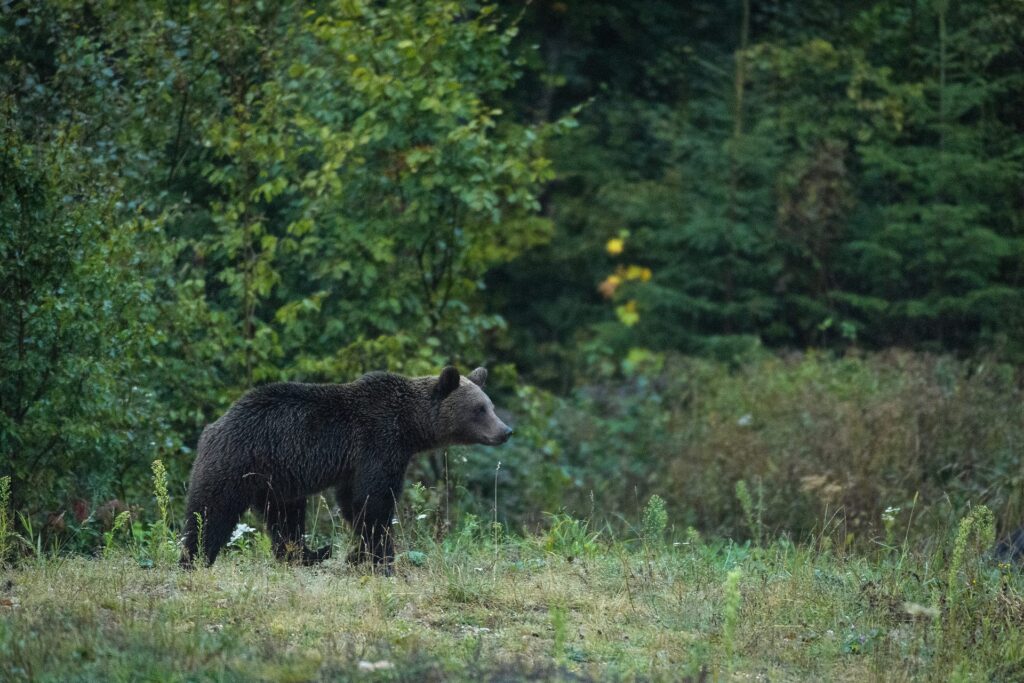 In a country which has one of the highest poverty rates in the European Union, the conservation of wild areas is not a priority. However, the mission of Foundation Conservation Carpathia (FCC) is to create a new economic avenue based on conservation. The team worked hard to re-engage the local communities with their land and create a socio-economic model which enables a thriving and sustainable livelihood.

“We conducted a study on ecotourism on the local economy and experts looked into whether the proper development of ecotourism in the National Park would make a positive economic difference, and the results turned out that way.” explains Barabara. “It is the right way to go, even from a purely economic view, it was wiser to develop a National Park with proper ecotourism infrastructure than continuing to log the forest.” 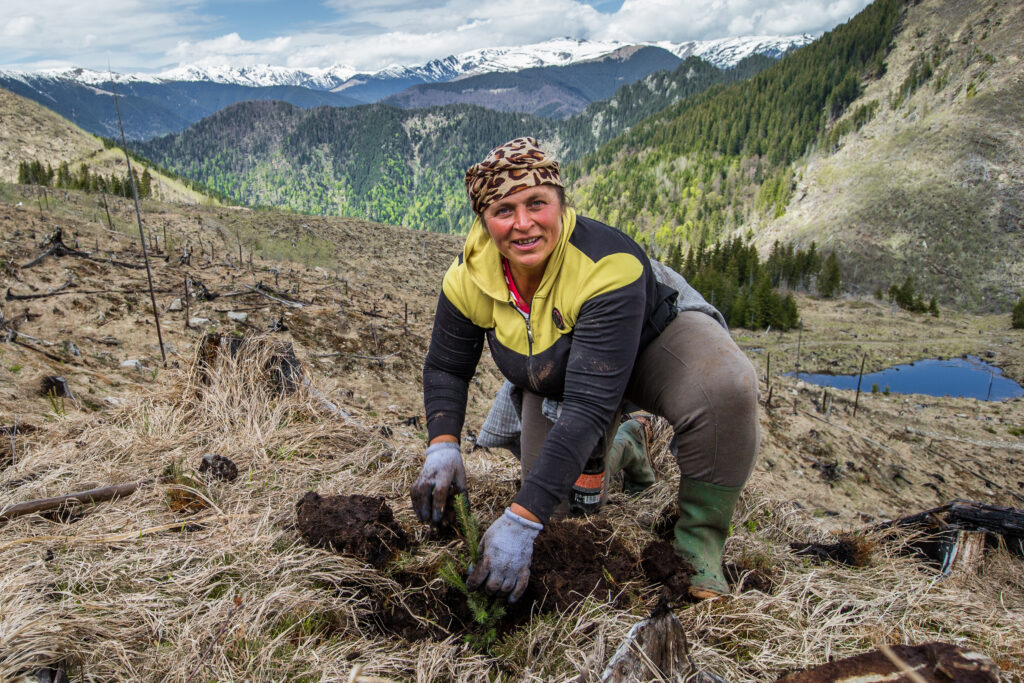 Already, Conservation Carpathia has grown to a team of 120 full-time employees with a further 200 seasonal staff employed for tree planting, breeding and tending the tree nurseries. This trend of job growth as a consequence of rewilding isn’t unique to Romania.

Isabella shares, “rewilding is a huge employer and the money is a more reliable and less stressful and risky way of earning an income over illegal extraction activities. A recent study from Rewilding Britain reveals that in the UK, rewilding projects are almost doubling employment in rural areas. Rewilding is not excluding people and losing money, but boosting our rural economy,” she confirms.

“In 10 years, we hope our work in the Făgăraș mountains serves as a model National Park where both nature and people thrive in other areas in the Carpathians,” says Barbara. “This is the only way Protected Areas can survive in the future, if they provide livelihoods to the people living in and around them.”

“If we show this can happen in other parts of Europe – across Scandinavia, Spain and the Iberian Insulia for example, it can be the start of something that can change the whole continent.” Isabella warmly encourages this vision, “Well, look what you’ve achieved in the last 15 years, maybe your future vision isn’t too crazy. There is enormous scope and optimism.”

5. When faced with a ginormous task, it is important to reflect on the journey so far.

Speaking of optimism, the talk also touched on the importance of staying positive during the current climate and environmental crises. Eco-anxiety in people is at an all-time high, and conservationists continue to work on an emotional rollercoaster of stark contrasting highs and lows.

“If we don’t move forward, then nothing is going to happen,” urges Barbara. “We need more people to think the same way and think positively, even when there are days you don’t think it is going to happen. It is also helpful to look backwards sometimes. When you’re always looking forward, you only see the obstacles, but when you turn around, you can see what you’ve achieved and where you’ve come from. It gives you a little push again to move on.” 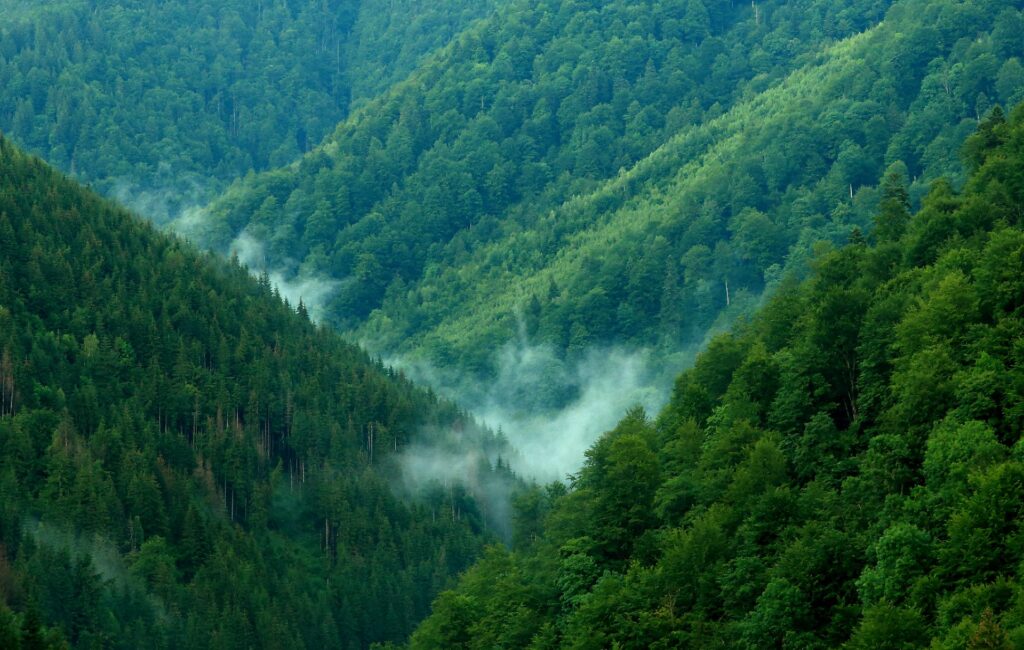 6. It is possible to be a part of advancing this remarkable mission by visiting it firsthand

We believe to truly engage and understand a rewilding story, you must experience it firsthand. In June, we will be travelling with a small group of guests to the Făgăraș Mountains to retrace the restoration of this extraordinary ecosystem, alongside Christoph and Barbara.  The journey will see us tracking key species which inhabit the region including lynx, wolves, boar, eagles and European brown bear, getting stuck into the vast reforestation project, speaking to and learning from the biologists on climate mitigation tactics and experiencing the diverse cultural traditions of Romania and its distinctive culinary and wine scene.

You will be hosted by Christoph and Barbara Promberger, and enjoy a welcome dinner with two special guests – Isabella Tree and Charlie Burrel from Knepp Rewilding.

“This trip through Journey’s with Purpose will be a very unique trip,” beams Christoph. “We’re very much looking forward to it. We’ll spend the whole week with a very exclusive group, and show unique insight into this project.”

“I can’t wait for June next year,” adds Isabella Tree. See the full itinerary here. If you would like to join this journey, please apply here.  Spaces are limited to just 14 guests.

Many other fascinating topics were discussed during this fire-side chat, including the reintroduction of bison and beavers and how Conservation Carpathia are helping to support National Parks in Ukraine throughout the war. You can watch the full recording via the link below.

FCC) have the ambitious yet realisable goal of establishing Romania as a global leader in biodiversity.  Creating a successful, sustainable eco tourism model is vital for reaching this achievement. Join us on this journey to help contribute to their mission.

JOIN THE JOURNEY IN CARPATHIA